If I were to have one book about Japanese  Gardens it would be the first one I bought almost 40 years ago.  “Space and Illusion”by Teiji Itoh is a book I return to for wisdom and inspiration. It was first published in Japan in the 1960’s and it provides a perfect balance of history, aesthetics and design wisdom for the interested student. It is not a “how to”  guide, rather its 82 pages of text and 103 photographs (mainly black and white)  that guide you to what is to appreciate in a Japanese Garden.

It addresses two classes of Japanese garden. In the first half it concentrates Shakkei- the capturing of scenery “alive” from beyond the boundaries of the garden. In the second half the author considers the tsuboniwa, the enclosed courtyard garden.   The narrative structure of the presentation follows the historic development starting with the recreation of coastal scenery in the Heian period (794-1185) through to simple courtyards in  twentieth century dwellings. You are introduced to the key points in medieval and early modern Japanese history and a few  of the key characters along the way- although in 82 pages which are mainly devoted to aesthetics it is mainly there to provide context.

I have reread the book over the past week. My garden thoughts are on capturing scenery. I have 300 degrees of scenery to capture. Itoh-san offers a lot of advice about the capture of scenery and he describes several techniques:-

Capturing by with tree trunks . Itoh shows us Entsu-ji garden in Kyoto which has a view of Mount Hiei over its boundary hedge. Just beyond the hedge are a stand of well paced red cedars with a fairly high canopy. The foliage does not hide  the summit of the mountain but the trunks divide the view into sections.  Alas I really do not have time to grow cedars to maturity.

Capturing with woods:    In Jihei Ogawa’s magnificent Murin-an  one’s eye is lead to Higashiyama mountain range by a stream -and perfectly framed by the  garden edge woodland.  Even in Meiji era a garden near the centre of the city would be surrounded by the architectural “noise’ of a city. In the twenty-first century even more, yet the careful tree pruning by the gardeners makes you believe you are miles from the city. I have edges of views which have features that need shielding from view, and at least in line of sight I am hoping to eventually have plants of sufficient maturity that will frame the desired  view and disguise modern infrastructure.

Capturing with posts and eaves:   In many classic Japanese garden pictures we are presented images of gardens from an  engawa (verandha) – the view is framed.  Itoh uses one of my favourite gardens Jiko-in as his exemplar. I enjoyed a tea ceremony in a hall whose walls were open on three sides There were magnificent karikomi pruned azalea on one side and on the other the view across the Yamato plane. This is significant for my own thinking.  In my garden there is no view up to the mountains I look down across valleys to the moorland.  My house is below the rear garden and the rear windows face directly to the garden rather than a broad view.  I am considering a modern construction that will  serve as a non-traditional teahouse at the top of the hill. Its structure will have to withstand gales – but will provide the possibility of posts and eves.

Capture with the sky : Itoh writes

” the adoption of compositional concepts from Japanese painting was one of the most fundamental of shakkei methods, and by far the most important of these concepts was that of the empty spaces in a picture. Both garden designers and gardeners viewed these empty spaces as corresponding to the sky over a garden, and it was only natural that they should do so.”

The art he refers to ,Yamato-e, come from the Heien period. Without the space of sky, a mountain peak would not be such prized scenery. The garden he most praises  is the Upper Garden of Shugaku-in (not generally open). I  need to think further on this in relation to my topography.

Capture with a stone lantern:  Itoh describes how in Joju-in garden, part of the Kiyomizu-dera complex , two lanterns, one nearby at the edge of a pond,  and the other in the middle distance in a clearing on an otherwise unremarkable hill transforms the scenery by drawing the eye in a particular direction. An effective technique- which any key object in the landscape can serve.

Capture with a window: Clearly the framing of posts and eaves can be extended to a window. Itoh describes how Matsudaria Sadanobu (1758-1829) a daimyo took away a rear wall of a tokonoma and replaced it with a window giving guests a view of Mt Fuji instead of the ususal hanging scroll.

I will return to Itoh’s advice and writing on tsubaniwa, courtyard gardens, later in the development of my plot.

The book is still available.

Fri Mar 11 , 2022
As wells looking through Architectural antiques yards for decorative objects I have also been on the search for materials for hard landscape- for walls, stepping […] 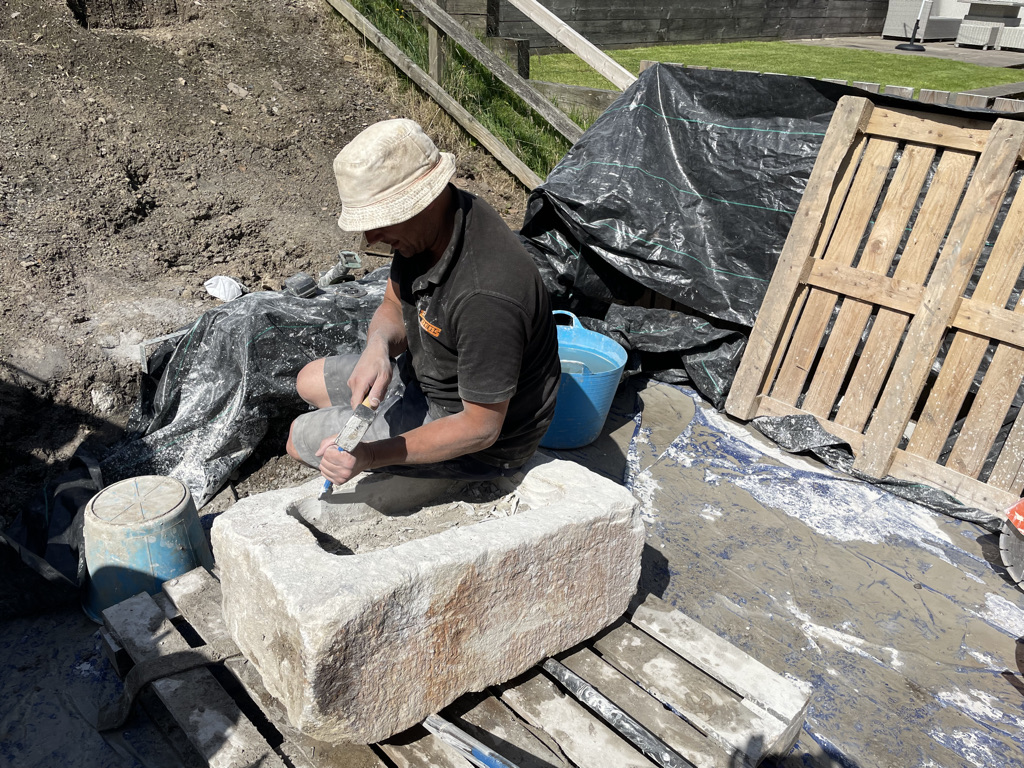